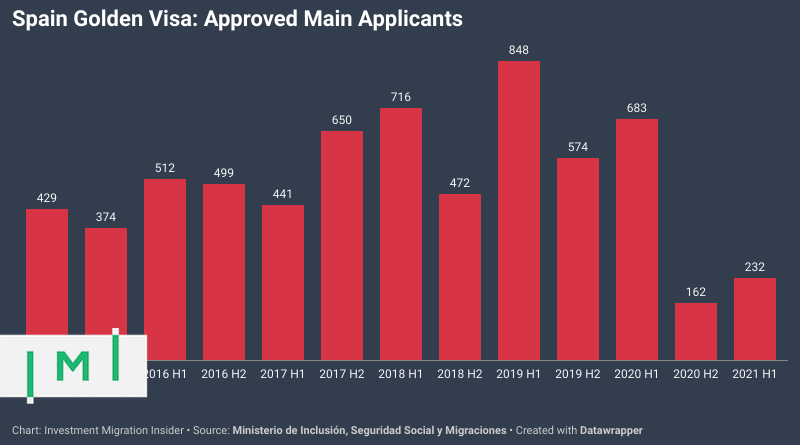 Spanish Golden Visa Approvals Up 43% in First Half of 2021

Spain approved 232 golden visa applications (main applicants) in the first half of 2021, according to statistics released late last month. The figure represents a 43% increase on the preceding six months, during which 162 golden visas were issued. though still considerably below the same six months in 2020, when Spain was approving golden visas hand-over-fist thanks to its rule on “positive silence”.

Spanish law uniquely favors residency permit applicants by mandating that applications be either approved or rejected within a 20-day period, barring which an application is considered approved by default, or tacit assent (silencio positive). In the first half of 2020, as Spain was still reeling from the sudden onset of the pandemic and most government bureaus remained closed, a majority of applications went unaddressed and, consequently, ended up being approved by tacit assent.

Indeed, the government admitted as much in its biannual report issued some six months ago; the number of tacitly approved applications had been reduced by 55% thanks to an improvement in capacity. That sent approval volumes plummeting in the second half of 2020. In 2021, however, they have begun a steady rise once more, though they remain depressed compared to the pre-pandemic period.

On a cumulative basis since the program’s opening in 2014, Chinese investors account for the largest share of applicants: 32% of the total. Similar to what’s been observed in both Portugal and Greece, however, Chinese dominance has waned markedly in recent years. As late as in 2018, they accounted for some 40% of approvals.

Russian applicants remain the second-largest investor group, making up a full quarter of all approvals since the program opened.